As a child, I wanted to grow up to be Obi-Won Kenobi, from Star Wars. I wanted to say wise things and teach "The Force" wierdly. As a Reiki Master, I seem to have gotten my wish.

I loved fantasy and science fiction growing up, that sense that there is more to the world than met the eye, and that we can interact with it. I always knew it was out there, but could never find it.  I tried classes and reading books on many things: yoga, taichi, chikung, psychic development, meditation, shamanism - but nothing completely "clicked", until Reiki.

Someone once told me my soul card in tarot was the charioteer. I was told it meant I had two horses (or sphinxes). One side of me was very analytical and logical, one part of me was very intuitive and creative. My goal was to figure out not which horse to drive, cause then I would go round in circles. I was to figure out how to drive both horses into a straight line. (To figure out your card, go to http://thetarotroom.com/soul-and-personality-cards/ or just Google "tarot soul card".)

So I tend to approach analytical things creatively and creative things analytically. In college I majored in Evolutionary and Ecological Biology, which was largely about how to test the untestable. The clever part of science is not just having the theory, but figuirng out clever ways to test it.  You can't test the theory of evolution, you can only test what the theory of evolution predicts. You cant take an ecosystem and put in on scale to measure its change from year to year. This scientific approach of figuring out ways to test the untestable has really helped my practice and study of Reiki.

I first encountered Reiki in Summer of 1992 at the Free Spirit Gathering in Maryland.  It was a camping weekend, where people offered many different classes in metaphysical topics. I went to the hour long Reiki 1 class because I never heard of it, and seemed as good a reason to pick that as any.  I fully expected it to be more of what I already had done, little exercises to strengthen the ki. Instead Reiki was different than that. I could really feel the energy!  They said that while they didn't recommend doing it so soon, they would be teaching a Reiki 2 class that afternoon. So of course I took Reiki 2!

With Reiki 2 I learned the basic 3 focusing symbols: power symbol, mental/emotional symbol, and distance symbol. With those 3 symbols the limit on what my compassion could touch became nonexistant. It was amazing, and because I already had a background doing metaphysical type things, and a background of thinking through things experimentally, I felt like I understood Reiki and could explore it at a deeper level.  A year later in 1993 I became a Reiki Master under the same teacher.

Because my first exposure to Reiki was so short, I knew I didn't know everything. I started collecting all the Reiki books in print. The one I liked best was William Rand’s Reiki: The Healing Touch. It was easy to read, postitive about continuing to learn and develop with Reiki, and focus on results, not just theory.  I also loved that he wanted to create an orgainization bigger than himself. Instead of creating just another “my name here" School of Reiki, he created the International Center for Reiki Training (ICRT). Today ICRT remains dedicated to Reiki worldwide, they publish not only Reiki.org, and CenterforReikiResearch.org, ChristianReiki.org, but also publish the Reiki News Magaine, and run ReikiMembership.com.

I was working in computer programming and was the first person in my company to be thrilled to get a business trip to Detroit!  William Rand lives about an hour north of Detroit in lovely area called Southfield. In addition to the great class, the thing I remember best is Willliam Rand and I getting to go see Stargate while was in the movie theaters! 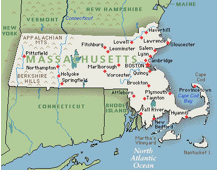 I grew up in eastern Massachusetts, in New England. Lived next to Salem until mid-high school, then moved to Cape Cod, near Hyannis. I attended college at Wheaton near Taunton, then worked in computers near Lowell and Lawrence. I also helped out in the family greenhouse business.

I later moved to Flagstaff, Arizona,  just north of Sedona in winter 1997. After that, I moved to the greater Los Angeles area of California in spring 1998 to live in a castle. I have lived in Glendora, Sierra Madre, South Pasadena, Frazier Park, and now I live in the central coast between Los Angeles and San Francisco, in the village of Cambria. Cambria is [A] on map above. I live with my husband Jeff Walters about 5 miles from Hearst Castle.

LIFE AS A REIKI PRINCESS

For 8 years I lived in a modern day castle in southern California. It started after I moved to Arizona and I met someone who said he lived in castle, and I didn't believe him. Through him I got to know the owner Mike, and on one of my visits, someone else just happened to announce moving out. I got invited to move in!  Watch Huell Howser’s 1990 marvelous introdcution to Rubel Castle: http://www.youtube.com/watch?v=naGKfCzFlxg

I got very interested in the history of Reiki. When I first learned Reiki, I was told that everyone who did Reiki in Japan had gotten together in a room during WW2, and that room had gotten bombed. So, that was the end of Reiki in Japan.  In the mid -1990s when we found out Reiki had not died out, but gone underground. I was fascinated.  In Feb 2001 I spent a week in Japan, spending most of time in Tokyo and 1 day in Kyoto, where I climbed the mountain where Reiki started, Mt Kurama. Once was not enough. So I spoke to William Rand about bringing a group there, and we planned it for October.

In meantime I found out about another Reiki school in Japan I could train with, if I got to Japan a few weeks earlier. So Sept 22nd I went to Japan.  This is just a few days after 9/11, planes had only been flying again for a few days but I was determined to go to Japan. After the class in Tokyo I had some time, and there wasn't much I could do for world peace. So I did the only thing I could figure out - I climbed the mountain where Mikao Usui received the Reiki, and did so 21 times. The day before I left, I missed going, so I went again, making it 22 times. I trained a few people in Reiki, and the following year I went back, to train those people in Reiki Mastery. So for a number of years I went to Japan every year. Writing my book, Reiki’s Birthplace: A guide to Kurama Mountain was largely a way to be in Japan on that mountain, even when I was home.

On July 4th, 2007 I married astrologer, actor, massage theapist Jeff Walters. After living in various places in the greater Los Angeles area we moved to Cambria.